"I just love exploring new places in my neighbourhood with East London Cares."

Indrani came along to her first social club in January 2020, and since then has been to almost 100 clubs at East London Cares.

"I’m a social being. I’m a retired nurse so I’m used to being surrounded by people. If not for East London Cares, I don’t know what would have happened to me.  I only joined East London Cares just before we went into lockdown, so it really was like a lifeline for me. Whether it's on zoom or on an outing, I’ve just enjoyed getting to know people. It’s never dull! I enjoy sharing a chat and hearing about other people’s experiences. East London Cares kept me going this year, and gave me a sense of belonging to a community.

East London Cares is a community that breathes new life into people. It’s a lifeline! It connects you to other people – just knowing that you will see friendly faces at the social clubs brings a new element to your life. Take the coffee morning - it’s not the free cup of coffee I’m dying to go and be with – it’s meeting the people and having a chat." 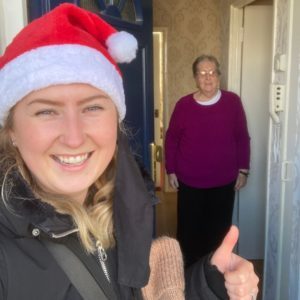 "Being part of East London cares taught me so much about East London, all it has to offer and its rich and diverse history and culture."

Aimee has been an East London Cares younger neighbour for two years after joining our first volunteer induction in 2019. She has attended over 20 social clubs, in-person and online, and has been a Phone a Friend match with Val for over a year.

“I first heard about East London Cares on the Reason to be Cheerful Podcast. I heard an interview between an older and younger neighbour and was totally invested in what The Cares Family were doing and wanted to get involved. I then searched for my nearest Cares family and signed up! I LOVE coming along to Social Clubs, there's such a community feel and everyone is always so friendly, welcoming and fun!

Sign up for our monthly storytelling email, to hear inspiring stories from your community, find out what’s on and hear how you can get involved